President Trump Sunday night, December 27, 2020,  signed the Covid-19 stimulus relief bill after initially refusing to sign it due to the billions of dollars going to foreign nations.

President Trump said Congress this week will vote on a separate bill to “increase payments to individuals from $600 to $2,000.”, according to a report by NTD News.

“”I will sign the Omnibus and Covid package with a strong message that makes clear to Congress that wasteful items need to be removed. I will send back to Congress a redlined version, item by item, accompanied by the formal rescission request to Congress insisting that those funds be removed from the bill,” Trump said. 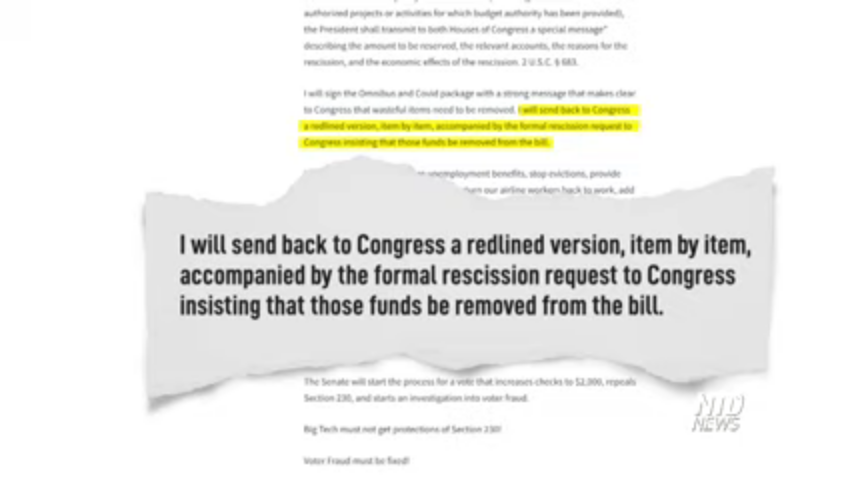 The President went on to say:

“As President, I have told Congress that I want far less wasteful spending and more money going to the American people in the form of $2,000 checks per adult and $600 per child,” Trump said.

“Much more money is coming. I will never give up my fight for the American people!”

Critics however say that President Trump has already signed the bill and cannot change anything, writes Cristina Laila with The Gateway Pundit.

After days of opposition and hours before the federal government was going to shut down, President Donald Trump signed the $900 billion coronavirus relief package, the White House announced Sunday night.

Congress passed the legislation last week after months of negotiations in the Senate. The package includes $600 checks for Americans who earn less than $75,000 per year, half of the $1,200 checks that were mailed out earlier this year.