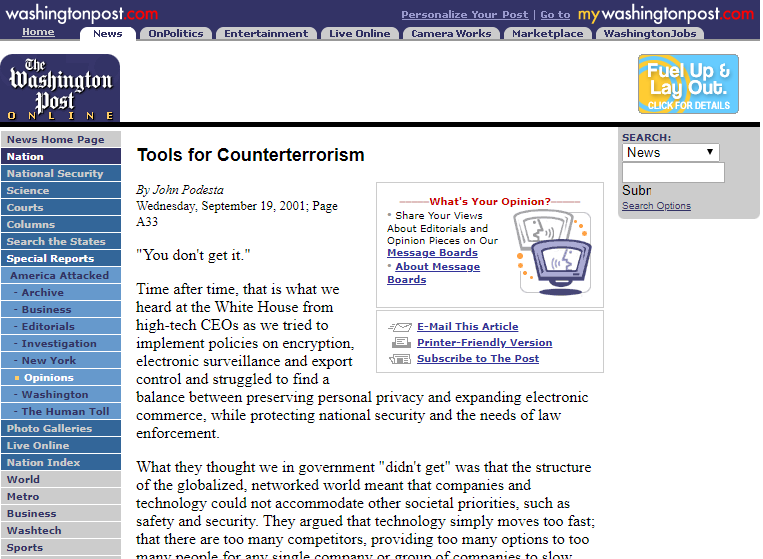 On September 19, 2001, former chief of staff and aide to Bill Clinton, John Podesta writes an OP ED in the Washington Post titled “Tools For Counter-Terrorism”. In the article, Podesta illustrates his six point plan to regulate the post 9/11 internet world suggesting that American’s emails and communications should be surveilled.

While the administration and Congress have to be mindful of the technological challenges ahead, a number of steps should be taken to strengthen our capacity to conduct surveillance while preserving America’s constitutional principles.

1. First, current statutes set standards that apply only to wiretaps of traditional hardware devices and not to software programs… Such telephone-era laws should be clearly updated to apply to the Internet era, ….. The wiretapping statute should apply equal standards to hardware and software surveillance.

2. Second, the same legal standards should apply to law enforcement’s access to e-mails, telephone calls and cable services… under the current Cable Act, for example, .. law enforcement cannot gain access to subscriber records unless the customer can first contest the issue in court.

3. Third, current law needs to be updated to govern when law enforcement can track the identity of those with whom we communicate. Our “trap and trace” rules come from the era of the traditional telephone network, … state or federal court should be able to issue an order to trace a communication to its source, regardless of whether that communication has been channeled through various telephone or Internet providers.

4. Fourth, current law provides the Justice Department with the ability to seek an order for a “roving tap” to follow the person not the telephone, but, as the attorney general has suggested, that authority may need to be expanded to cover more circumstances… including authorizing roving wiretaps under the Foreign Intelligence Surveillance Act.

5. Fifth, a constitutional framework needs to be established in law to govern the disclosure to and use by law enforcement of encryption keys held by third-party custodians.

6. Finally, Congress needs to fully fund the FBI’s Technical Support Center, established in the Anti-Terrorism and Effective Death Penalty Act of 1996, to give the FBI the tools it needs to deal with terrorists employing sophisticated new technology, including encryption.

In the end, we will never know whether these measures would have prevented the terrorist attacks of last week. But we can be confident that these tools, coupled with support from our high-technology community, can help prevent future attacks.