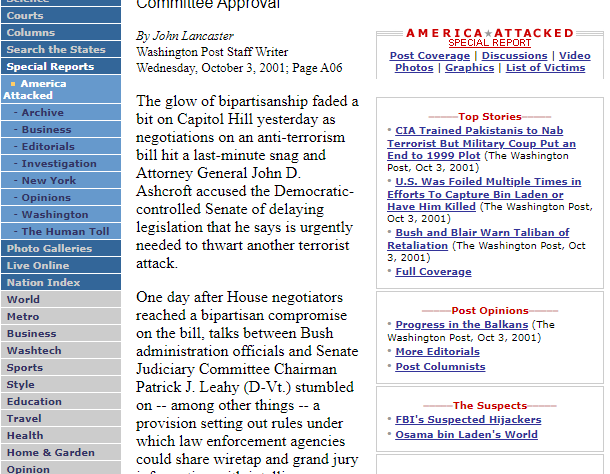 In the Washington Post October 3 article: “Anti-terrorism Bill Hits Snag on the Hill; A dispute Between Senate Democrats, White House.” The article’s author, John Lancaster noted that Senate Judiciary Committee Chairman Patrick J. Leahy accused the White House of reneging on an agreement.” The issue was “a provision setting out rules under which law enforcement agencies could share wiretap and grand jury information with intelligence agencies.” Leahy had been under the impression that his negotiations with the White House had produced an acceptable compromise; suddenly he discovered the compromise had been rejected.

Attorney General John D. Ashcroft accused the Senate of delaying legislation that he says is urgently needed to thwart another terrorist attack. Ashcroft said that the Senate was not moving with sufficient speed and that “Talk” would not prevent terrorism, adding that he was deeply concerned with the rather slow pace at which the legislation was moving.

The Washington Post reported that Senate Majority Leader Thomas A. Daschle supported Pat Leahy and said that he “doubted the Senate could take up the legislation before next week.” In other words, both Leahy and Daschle intended to violate Cheney’s October 5 deadline.