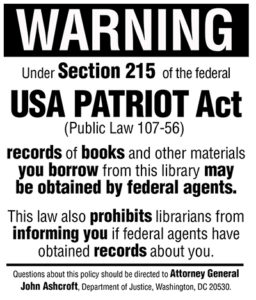 President George W. Bush signs the Patriot Act into law on October 26, 2001. The title of the Act (USA Patriot Act) is a contrived three letter initialism (USA) preceding a seven letter acronym (PATRIOT), which in combination stand for Uniting and Strengthening America by Providing Appropriate Tools Required to Intercept and Obstruct Terrorism Act of 2001.

Those opposing the law have criticized its authorization to search a home or business without the owner’s or the occupant’s consent or knowledge; the expanded use of National Security Letters, which allows the Federal Bureau of Investigation (FBI) to search telephone, e-mail, and financial records without a court order; and the expanded access of law enforcement agencies to business records, including library and financial records.

The Patriot Act increases the government’s power to spy in the following areas:

The result is unchecked government power to rifle through individuals’ financial records, medical histories, Internet usage, bookstore purchases, library usage, travel patterns, or any other activity that leaves a record.  Making matters worse: The government no longer has to show evidence that the subjects of search orders are an “agent of a foreign power,” a requirement that previously protected Americans against abuse of this authority. The FBI does not even have to show a reasonable suspicion that the records are related to criminal activity, much less the requirement for “probable cause” that is listed in the Fourth Amendment to the Constitution. Judicial oversight of these new powers is essentially non-existent.

The Patriot Act violates the Fourth and Fifth Amendments. The Fourth Amendment, which protects us from unreasonable seizures and searches and prohibits the issuing of a warrant without “probable cause” (as defined by the Attorney General), is undermined in the act, which states that if the warrant keeps any tangible property or wire or electronic communication from being seized, it can be delayed. The court can extend the delay indefinitely. The Fifth Amendment protects our right to habeas corpus, due process, and keeps our private property from being taken for public use without “just compensation.” Not only is compensation not mentioned in the act, judicial review and habeas corpus are explicitly disregarded. There is also no right to appeal in such a case, and the final word is left to the Supreme Court with its “Rule of Decision.”