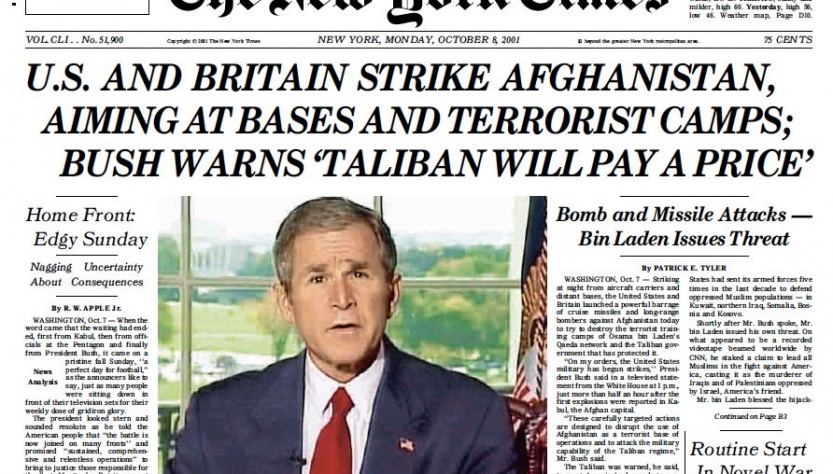 The September 11 attacks were blamed on Osama bin Laden. Even though Osama bin Laden was from Saudi Arabia (as well as the highjackers), he was believed to be living or hiding in Afghanistan.  President Bush demanded that the Taliban, hand over bin Laden.  The Taliban declined to extradite him unless they were provided clear evidence of his involvement in the attacks, which the US dismissed as a delaying tactic.

On 7 October 2001, President Bush launched Operation Enduring Freedom with the United Kingdom and thus, began the invasion of Afghanistan.  To justify the War, the Bush administration claimed that Afghanistan only had “selective sovereignty”, and that intervention was necessary because the Taliban threatened the sovereignty of other states.

The combat operations that took place on 7 October 2001 included a mix of strikes from land-based B-1 Lancers, B-2 Spirit and B-52 Stratofortress bombers, carrier-based F-14 Tomcat and F/A-18 Hornet fighters, and Tomahawk cruise missiles launched from both U.S. and British ships and submarines.

The initial military objectives of OEF, as articulated by President George W. Bush in his address to the country on Oct 7, included the destruction of terrorist training camps and infrastructure within Afghanistan, the capture of al-Qaeda leaders, and the cessation of terrorist activities in Afghanistan.