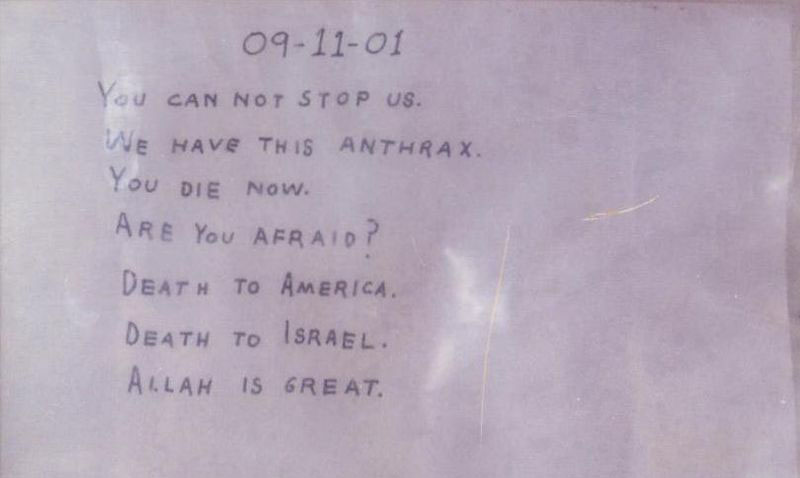 Two more anthrax letters, similar to the ones sent to media companies and bearing the same Trenton postmark, were dated October 9, three weeks after the first mailing. The letters were addressed to two Democratic Senators, Tom Daschle of South Dakota and Patrick Leahy of Vermont. At the time, Daschle was the Senate Majority leader and Leahy was head of the Senate Judiciary Committee.  On October 15, 2001, Leslie Grant, the intern working for Tom Daschle, opened a letter to the senator to find two grams of B. anthracis spores along with the following text: 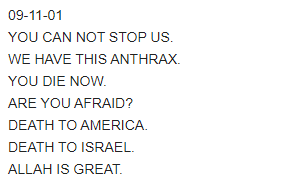 The preparation of anthrax spores in the Daschle letter was, unlike the text of the letter, extremely sophisticated. Due to the aerosolized (“floaty”) nature of the prepared spores, a characteristic not easily achieved since in nature the spores tend to clump, many people in the Hart Senate building tested positive for exposure. There was general shock as it was discovered that the spore preparation, behaving essentially like smoke, had quickly drifted off and contaminated much of the building.

At least 22 people developed anthrax infections, 11 of whom contracted the especially life-threatening inhalational variety. Five died of inhalational anthrax: Robert Stevens; two employees of the Brentwood mail facility in Washington, D.C. (Thomas Morris Jr. and Joseph Curseen) and two whose source of exposure to the bacteria is still unknown. The Hart Senate building had to be closed and the senators with offices there relocated.

The unopened Leahy letter was discovered in an impounded mailbag that had been misdirected to the State Department mail annex in Sterling, Virginia, because a ZIP code was misread; a postal worker there, David Hose, contracted inhalational anthrax.

The envelopes addressed to Senators Daschle and Leahy had a fictitious return address: