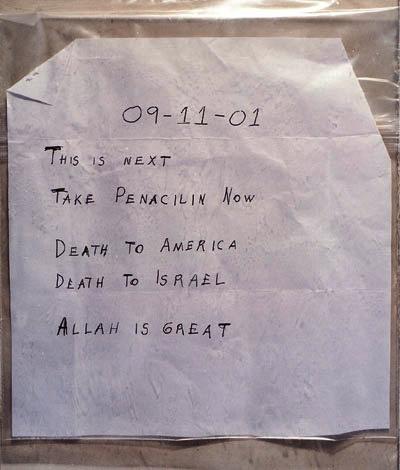 October 3 would mark the first diagnosis of anthrax following the September 11 attacks.
On September 30, photo editor Robert Stevens, who worked at the Sun tabloid, published by AMI, came down with “flu-like symptoms” and crawled into the backseat of his car to rest, letting his wife take the wheel. He had inhalation anthrax. His illness would be diagnosed on October 3 and he would die on October 5.

A set of anthrax letters had been sent by US mail to various media companies. The letters had a Trenton, New Jersey postmark dated September 18, 2001. It is not known how long it took the letters to reach their destination or when the letters were actually opened, as the symptoms of anthrax can take several days to develop.

Five letters are believed to have been mailed at this time to ABC News, CBS News, NBC News and the New York Post, all located in New York City, and to the National Enquirer at American Media, Inc. (AMI) in Boca Raton, Florida.

Only the New York Post and NBC News letters were found; the existence of the other three letters is inferred because individuals at ABC, CBS and AMI became infected with anthrax. Scientists examining the anthrax from the New York Post letter said it appeared as a clumped coarse brown granular material looking like dog food.

The image of the original note is the one that was sent to NBC addressed to Tom Brokaw.