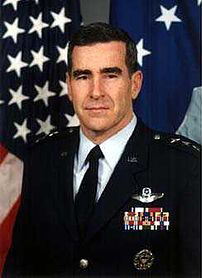 Lieutenant General David J. McCloud was an American Air Force lieutenant general. He was a Commander of the 366th Composite Wing, in Idaho. In August of 1994, he was transferred to Washington DC as Director of Operational Requirements, and Deputy Chief of Staff for Plans and Operations, and in May of 1996 became Director for Force Structure, Resources and Assessment, J-8, the Joint Staff in Washington, D.C. In December of 1997, he was transferred to Alaska as  Commander of Alaskan Command, 11th Air Force, and the Alaskan North American Aerospace Defense Command Region, headquartered at Elmendorf Air Force Base, Alaska.

On July 26, 1998, McCloud died when his YAK-54 aerobatic plane crashed, allegedly from sabotage. McCloud was one of several flag officers (including Admiral Boorda) who had assembled evidence against President Bill Clinton, and related matters.