Trans World Airlines Flight 800 (TWA 800) was a Boeing 747-100 that exploded and crashed into the Atlantic Ocean near East Moriches, New York, on July 17, 1996, 12 minutes after takeoff from John F. Kennedy International Airport on a scheduled international passenger flight to Rome, with a stopover in Paris.

All 230 people on board died in the crash. Among them, was Mohamed Ferrat, Age 61. Mohamed was Ron Brown’s high level Muslim associate. Mohamed Ferrat was supposed to be on Ron Brown’s doomed death flight, but he changed plans at the last minute. 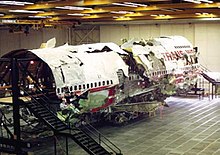