After the failed infiltration of the Branch Davidians, negotiators had managed to facilitate the release of 19 children, ranging in age from five months to 12 years old, without their parents, however, 98 people remained in the building.

As the siege wore on, increasingly aggressive techniques were used to try to force the Branch Davidians out, such as sleep deprivation of the inhabitants by means of all-night broadcasts of recordings of jet planes, pop music, chanting, and the screams of rabbits being slaughtered. 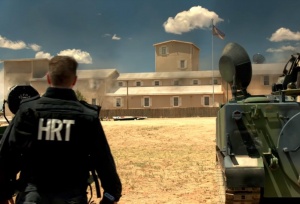 The armored vehicles were used to destroy perimeter fencing and outbuildings and crush cars belonging to the Branch Davidians. Armored vehicles repeatedly drove over the grave of Branch Davidian Peter Gent despite protests by the Branch Davidians AND the negotiators. Two of the three water storage tanks on the roof of the main building had been shot at and holed in the initial ATF raid. Eventually the FBI cut all power and water to the compound, forcing those inside to survive on rain water and stockpiled military MRE rations.