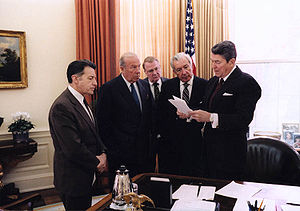 After the Iran-Contra incident that occured under the vice-presidency of George H. W. Bush, several investigations ensued, including those by the U.S. Congress and the three-person, Reagan-appointed Tower Commission. Charges were brought against five individuals for their support of the Contras. Those charges, however, were later dropped because the administration refused to declassify certain documents.

After Director of the CIA, William Casey, was unable to testify due to his untimely death, the indicted conspirators faced various lesser charges. In the end, fourteen administration officials were indicted, including then-Secretary of Defense Caspar Weinberger. Eleven convictions resulted, some of which were vacated on appeal.

Implicated in the Iran-Contra affair, among others, were the Bill and Hillary Clinton, George H.W. Bush, George W. Bush, Jr., and Jeb Bush.

George H. W Bush, pardons all the indicted or convicted from the Iran-Contra Affair, in the final days of his presidency.