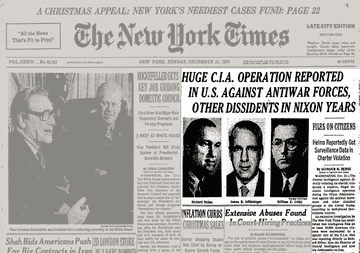 On December 22, 1974 it was discovered that the CIA, over the years had been engaging in covert action programs involving assassination attempts against foreign leaders and covert attempts to subvert foreign governments.

The CIA had been rocked by these revelations, in a story by The New York Times, which alleged that intelligence files on at least 10,000 American citizens were maintained by a special unit of the C.I.A. that was reporting directly to Richard Helms, then the Director of Central Intelligence and then Ambassador to Iran.

In addition, the sources said, a check of the C.I.A.’s domestic files ordered last year by Mr. Helms’s successor, James R. Schlesinger, produced evidence of dozens of other illegal activities by members of the C.I.A. inside the United States, beginning in the nineteen‐fifties, including break‐ins, wiretapping and the surreptitious inspection of mail.