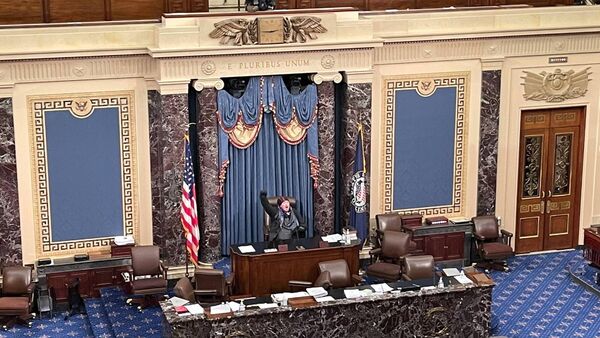 Congress was meeting today to certify the Electoral College Votes and when news circulated that Vice President Mike Pence was allowing the count to move forward, protesters started storming the Capitol steps.

WASHINGTON DC: There are at least 100,000+ people just in the overflow for the event

Videos can not describe the size of the crowd. This is wild pic.twitter.com/yyp0IgTJEc

Officials have closed down and evacuated two buildings on Capitol Hill.

The protesters tore through four layers of security fencing, and overran federal police, to get through to the floor.

IMPORTANT: this is exact moment the siege of the Capitol building began as the two men in front ripped down a preliminary barrier & rushed officers who were behind a 2nd barrier

They then encouraged others to follow their lead. Officers appeared to be taken completely off guard pic.twitter.com/LE0a01PXBi

Officers were unable to keep the crowd from advancing pic.twitter.com/jbI0aRbnjh

Shocking scenes at the Capitol Building show some Congressmen with guns drawn and others taking cover as shots rang out.

One Trump supporter was shot and killed, and three others shot, by oath-breaking police officers.

Once inside the building, some patriots took over Nancy Pelosi’s office.

A supporter of President Donald Trump sits inside the office of Speaker of the House Nancy Pelosi as he protests inside the US Capitol.

President Trump took to twitter to call for calm saying “I am asking everyone at the US Capitol to remain peaceful. No violence,” he said, “Remember, we are the party of law and order, respect the law and our great men and women in blue.”

Looks like some kind of special forces are arriving at the senate pic.twitter.com/yA0aDit5z8