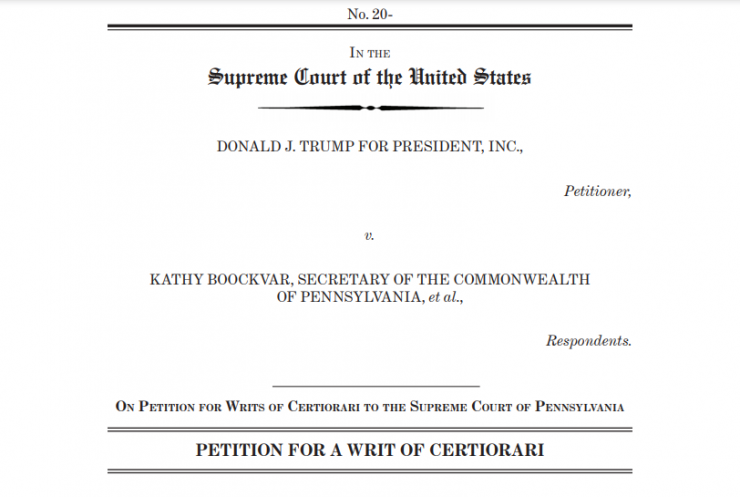 The Trump campaign on Sunday, December 20, 2020, filed a writ of certiorari to the US Supreme Court to reverse several Pennsylvania Supreme Court rulings that changed the state’s mail-in ballot law before the 2020 election.

The Trump campaign alleged in its filing that the Pennsylvania Supreme Court violated Article II of the US Constitution and the Bush v Gore SCOTUS ruling, writes Cristina Laila with The Gateway Pundit.

“Article II of the Constitution provides that “Each State shall appoint [electors for President and Vice President] in such Manner as the Legislature thereof may direct.” U.S. Const. art. II, § 1, cl. 2 (emphasis added). That power is “plenary,” and the statutory provisions enacted by the legislature in the furtherance of that constitutionally-assigned duty may not be ignored by state election officials or changed by state courts. Bush v. Gore (“Bush II”), 531 U.S. 98, 104-05 (2000).” the Trump campaign wrote in its appeal to the Supreme Court.

Read the petition filed by the @TeamTrump Campaign to the U.S. Supreme Court. ⬇️https://t.co/PAnFll397E

“This case presents in stark relief several of the violations that occurred in Pennsylvania. Together, those violations alone affected more ballots than the current margin of difference between the two principal candidates for President in Pennsylvania,” the campaign’s legal team wrote in its petition.

“The Fourteenth Amendment of the Constitution, Section 1 provides, in relevant part: “nor shall any State deprive any person of life, liberty, or property, without due process of law; nor deny to any person within its jurisdiction the equal protection of the laws.”

The campaign’s petition asked for an expedited review and a reply from the highest court of the land by this Thursday.

Petition filed by President Trump’s campaign to the Supreme Court: