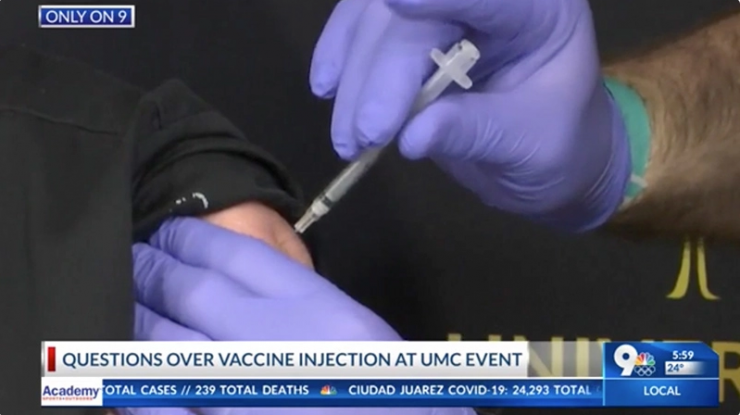 Footage aired on an El Paso, Texas news station showed a health care worker receiving a COVID-19 vaccination, but the plunger was already pressed before the syringe penetrated their skin.

Kelen McBreen with Infowars reports that KTSM 9 originally aired the footage on Tuesday, and they played the clip again on Wednesday after viewers noticed the phantom vaccination.

“You can see the UMC health care worker with his sleeve rolled up, but when it comes time for the injection look at the top of the syringe,” a KTSM 9 anchor explained. “It appears the person administering the shot does not press down on the plunger. It actually looks like the plunger is already depressed. Our viewers wondering whether the worker received the vaccine at all.”

Next, the El Paso outlet showed a side-by-side comparison of another vaccine administered the day of the video in question, which clearly proves the original shot was not handled correctly.

In a statement to KTSM, the University Medical Center of El Paso (UMC) said, “After numerous reports emerged on social media claiming one of the five nurses receiving a vaccination on Tuesday did not receive a full dose of vaccine, we want to remove any doubt raised that he was not fully vaccinated and further strengthen confidence in the vaccination process. The nurse in question today was vaccinated again. UMC has confirmed with the US Advisory Committee on Immunization Practices (ACIP) that re-vaccinating the nurse will not cause adverse effects. The nurse will need to return after three weeks to receive his second dose.”

Another video going viral online appears to show yet another fake vaccine being administered on live television as a needle is easily seen before entering a patient’s arm, but disappears when pulled out.

What happened to the needle?!?

Another video shows a product designed to fake vaccinations using a retractable syringe.

Yeah ok.
So will it be a fake vaccine solution or just a fake needle? pic.twitter.com/5QjSa6xMjk

If the vaccine is so safe, why are people seeming to fake administering it?