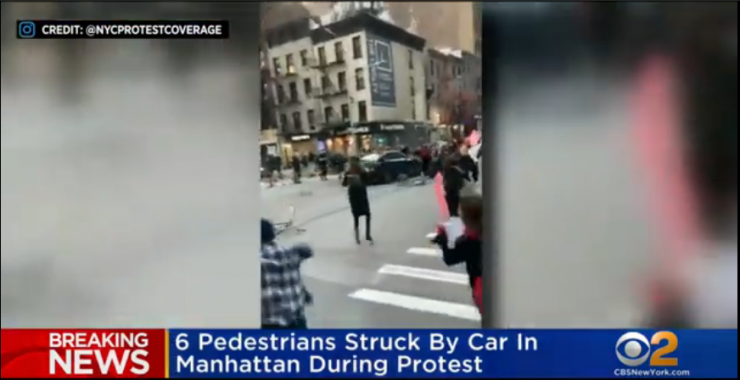 A report by CBS New York shows when a car drove into a group of protesters at a Manhattan intersection Friday December 11, 2020. As usual, the protesters believe that it is their right to block traffic and terrorize drivers, causing them to fear for their lives and drive through them. The driver stayed on scene to be questioned by police.

The incident occurred just after 4 p.m. on December 11, 2020 at the corner of East 39th Street and Third Avenue in Murray Hill, according to police. There were about 40-50 protesters in the area at the time, police said, and six people were struck, a police source told NBC New York. None of the injuries were considered life-threatening.
A law enforcement source at the scene said that it may not have been a premeditated or intentional act. The driver and passenger, both females, remained at the scene and were talking with police.

On Twitter, the NYPD urged people to avoid the area “due to a vehicle collision involving multiple pedestrians.”
Police did not share any other information regarding the incident nor the driver, and it was not clear what charges the driver would face, if any.
The driver of the vehicle remained on the scene and several protesters have been detained.

Please avoid the area of 3rd Avenue & 39 Avenue in Manhattan due to a vehicle collision involving multiple pedestrians. Information at this time is preliminary, updates to follow. pic.twitter.com/GZLKgMyZUK

Police did not immediately release how many people were hurt or the extent of their injuries, but at least a couple of people were seen being put into ambulances.
“Please avoid the area of 3rd Avenue & 39 Avenue in Manhattan due to a vehicle collision involving multiple pedestrians. Information at this time is preliminary, updates to follow,” the NYPD tweeted.