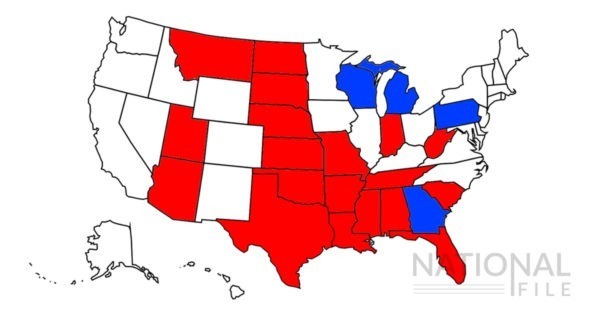 Arizona has joined 18 other states in supporting Texas’s lawsuit in SCOTUS against Pennsylvania, Michigan, Wisconsin, and Georgia, over election integrity.

As National File previously reported, the crux of the Texas lawsuit is that the swing states of Pennsylvania, Georgia, Michigan and Wisconsin violated their duties under the US Constitution, by illegally altering legislated election laws, treating voters unequally, and allowing numerous voting irregularities to take place as a result.

Much of the argument rests on the election laws changed regarding mail-in ballots, where executives, such as the Secretarys of State, pulled back the deadlines for the acceptance of these ballots, with some dates even being after November 3rd itself. These changes were enacted unilaterally, without the consent of the legislature.

“Plaintiff State respectfully submits that the foregoing types of electoral irregularities exceed the hanging-chad saga of the 2000 election in their degree of departure from both state and federal law,” the motion before the Supreme Court states.

The state of Texas has sued Georgia, Michigan, Pennsylvania & Wisconsin over election irregularities!

“Moreover,” the petition continues, “these flaws cumulatively preclude knowing who legitimately won the 2020 election and threaten to cloud all future elections.”

19 states (red) have joined the lawsuit against the four battleground states (blue)
Arizona joined the lawsuit on Thursday, meaning 19 states in total are now suing Pennsylvania, Georgia, Wisconsin and Michigan. Arizona Attorney General Mark Brnovich confirmed that they had filed an amicus curiae brief with the Supreme Court in a statement:

Our Office has received many inquiries about the Texas v. Pennsylvania lawsuit filed at the U.S. Supreme Court and whether Arizona will participate. Here is my statement and our legal filing: https://t.co/82qIu1lQ5B pic.twitter.com/tRY6c6lTJl

National File reported on Thursday that President Trump himself had filed a motion to intervene in the lawsuit within his personal capacity as a presidential candidate seeking re-election.