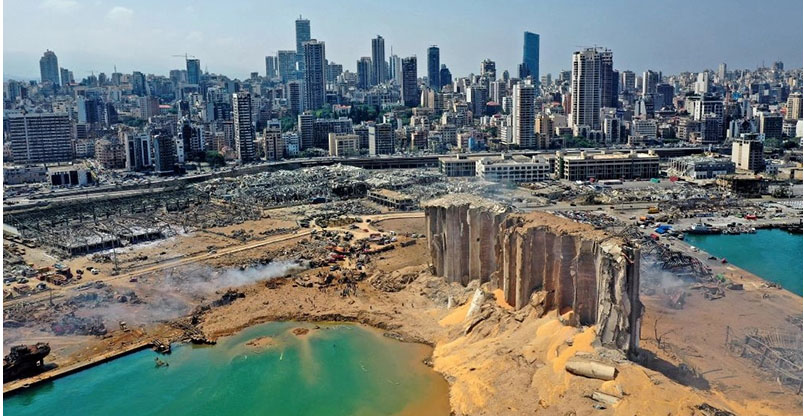 On August 5th, 2020 Steve Watson at Infowars.com writes that while the official narrative of yesterday’s massive explosion in Beirut remains ‘some chemicals in a warehouse’, President Trump told reporters Tuesday evening after a meeting with US generals that “They seem to think it was an attack. It was a bomb of some kind.”

Without providing any evidence, President Trump claims the explosion in #Beirut is a result of an attack.

This contradicts the official statement of the Lebanese prime minister. @akhbarpic.twitter.com/QbfiS6DN68

Referring to “our great generals”, Trump said that “According to them – they would know better than I would – but they seem to think it was an attack. It was a bomb of some kind.”

The blast was so massive that it levelled buildings up to ten miles away, and was felt in Cyprus, over a hundred and forty miles away.

My city Beirut after the explosion. What a tragedy. It's too much to bear 💔😢@akhbar pic.twitter.com/2GVePyZMOT

Just received from a colleague in Lebanon. #Beirut pic.twitter.com/k3oAzGWMwv

Beirut has been declared a ‘disaster zone’ by Lebanon’s defense council, and the health ministry has raised the death toll to over 100 killed, with some 4000 wounded.

The US embassy warned that “There are reports of toxic gases released in the explosion so all in the area should stay indoors and wear masks if available.”

Fully destroyed. Too much bodies to count. #beirutexplosion @akhbar pic.twitter.com/TYMVx0WZVo

Hospitals in #Beirut turning away injured people with blood streaming down their faces because they're too full or damaged to take them in pic.twitter.com/HSXzwCBICP

Beirut is like war zone at the moment. The number of people died is unknown. There is a massive destruction in the city.

Our prayers are with Lebanese brothers and sisters. #Beirut #Lebanon pic.twitter.com/sVNlWVSxc2

The Prime Minister of Lebanon claimed that around 2,750 tons of ammonium nitrate that was left unsecured for many years was to blame for the explosion.

Meanwhile, Israel and Hezbollah both denied having any involvement.

Israeli military sources tell Israeli 10 News reporter: Israel didn't bomb Beirut. The explosion did not occur in a Hezbollah weapons depot. This was not a security-related event. https://t.co/hgDXFVxZdH