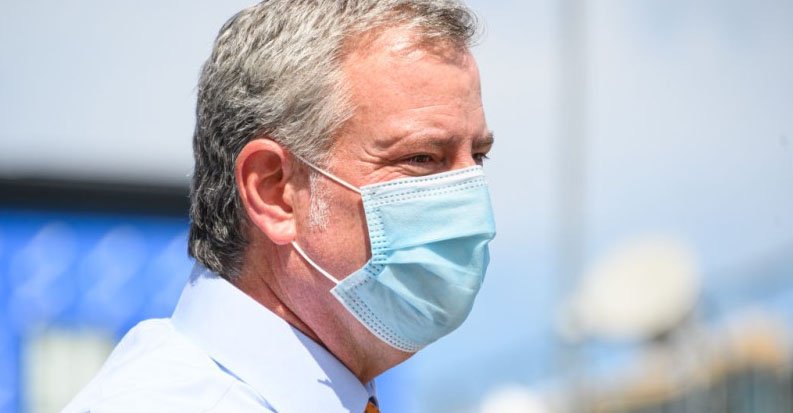 Mayor Bill de Blasio has announced that he will set up COVID checkpoints around New York City in an attempt to catch anyone who flouts their 14 day quarantine order.

Anyone arriving in NYC from 34 states and Puerto Rico is subject to a strict 14 day stay at home order and faces large fines if they violate the rule.

That will now be enforced with manned coronavirus checkpoints where those caught violating their quarantine will be penalized, reports Paul Joseph Watson at Infowars

“Starting Wednesday, the city will implement COVID-19 checkpoints at key entry points into the city, de Blasio said. They will vary daily, though the mayor said one will appear at Penn Station on Thursday. Another is planned for Port Authority.”

“The city hopes to implement “full-fledged checkpoints” where viable and hold them at other locations where they’re unlikely to create major traffic backups. De Blasio says the city stands ready to assist travelers who need a safe place to isolate for 14 days. The test and trace team has already made nearly 90,000 calls to travelers affected by the quarantine order and sent nearly 21,000 texts.”

While de Blasio threatens people traveling around NYC with astronomical fines that could run as high as $10,000, he has simultaneously overseen an emptying of prisons that has led to skyrocketing crime across New York.

As we highlighted last month, shootings soared by a whopping 277 per cent compared to the same week last year. In June, it was reported that there had been 38 murders over the last 28 days up until June 14, twice as many as the previous year.

Despite soaring crime, the Mayor also devoted no fewer than 27 police officers to guard a Black Lives Matter mural outside Trump Tower.

One method to avoid interrogation at coronavirus checkpoints may be to state that you have attended a BLM protest.

“The hundreds of contact tracing workers hired by the city under de Blasio’s new “test and trace” campaign have been instructed not to ask anyone who’s tested positive for COVID-19 whether they recently attended a demonstration,” reported The City back in June.

Lest we forget that de Blasio also urged New Yorkers to “get out on the town despite coronavirus” and visit the cinema as late as March 2nd.