Protester dies after struck by speeding car at Black Lives Matter freeway demonstration in Seattle. Garrett Foster pointed and fired an AK47 into the vehicle and was then hit by the driver of the vehicle. See his famous last words.

“One adult male victim was located with a gunshot wound,” police said as reported by The Gateway Pundit. “Initial reports indicate that the victim may have been carrying a rifle and approached the suspect vehicle. Suspect was in the vehicle and shot at the victim. Suspect was detained and is cooperating with officers.” 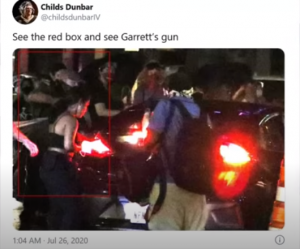 Make that a bottomless mimosa. This is the tally from last night so far: 1. BLM army shoots three of its own in Louisville. 2. BLM supporter with an AK47 in Austin attacks a car and is promptly shot dead by driver. Aurora, shoots at car, shoots other rioters instead. 🤡🇨🇳🤡