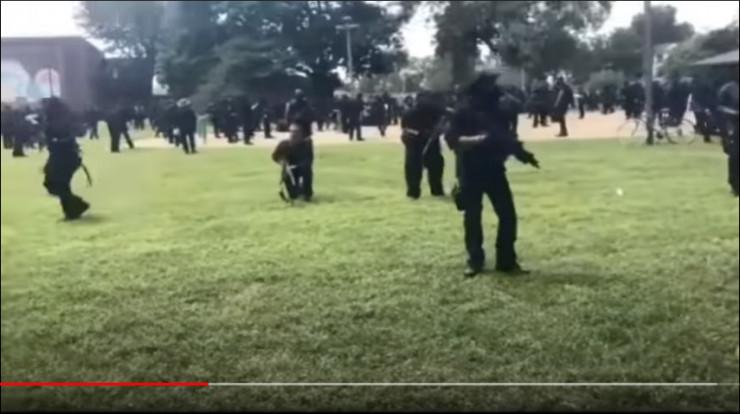 A black militia group who describe themselves as the “Not Fucking Around Coalition” (NFAC), joined Black Lives Matter (BLM) for a planned protest in Louisville, KY. The NFAC members showed up to the protest heavily armed but not readily trained.

Three members were shot after one of it members accidentally fired several shots during the Black Lives Matter protest. The rally had bean held to protest the death of Breonna Taylor by Louisville police.

What do they do then? Well, on Independence Day, Jay said:

“Our initial goal was to have a formation of our militia in Stone Mountain to send a message that as long as you’re abolishing all these statues across the country, what about this one?”

The shooting took place near Baxter Square Park around 1 p.m. and all of the victims were transported to the University of Louisville Hospital with non-life-threatening injuries, the Louisville Metro Police Department (LMPD) told Fox News.

Protesters ducked behind cars and scattered to flee the area, a reporter from WHAS11 wrote on Twitter.

BREAKING: We just watched two people be taken onto stretchers at Baxter square on 12th and Jefferson. Metro safe has confirmed reports of shootings & that there are multiple victims. We heard the noises when people scattered to get behind cars, & to take a knee @WHAS11 #nightteam pic.twitter.com/h5AsPWlLbi