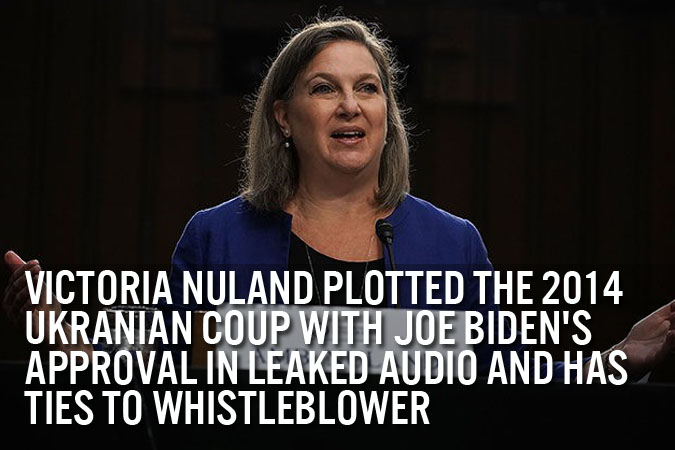 Several years ago, we at The Perilous Fight covered the leaked audio of Victoria Nuland and the Soros protestors’ involvement in the overthrow of the Ukranian President. This was part of our coverage of the takedown of flight Malaysia MH-17 over Ukraine in 2014.

Victoria Nuland is a top US Diplomat to Europe. She served as the principal deputy foreign policy adviser to Vice President Dick Cheney, then as US Ambassador to NATO under George W. Bush. She outlined Obama’s post-Benghazi talking points; and became Assistant Secretary of State for European and Eurasian Affairs under Barack Obama. On February 4, 2014, in a leaked phone call between Victoria Nuland and US Ambassador to Ukraine, Geoffrey Pyatt, Nuland is heard plotting the internal workings of the future of the Ukrainian Government. She is recorded saying that Yanukovych should be removed from office, and Arseniy Yatsenyuk should be brought in as new Prime Minister.

In the four minute conversation, she also expresses that Joe Biden has approved her proposal, and they also discuss acting quickly before Russia intervenes. (Listen: Victoria Nuland Says F*CK the E.U. in Leaked Phone Call. audio).

As the embarrassing recording is passed around You Tube, The State Department and the White House dismiss the recording suggesting that it was the source of a Russian leak, and should be ignored.

On February 18, 2014, A CIA Front Group funded by the State Department, and Rothschild agent George Soros’ frontgroup bankrolled a Mob of protesters to overthrow the democratically elected president Viktor Yanukovych.

As Ukrainians were more Russian than European, most Ukrainians spoke Russian and preferred to join with Russia. The mainstream media, however would report the situation as a revolution by the people. This “Revolution” led to the removal of Viktor Yanukovych and his government by parliament.

On March 21, 2014, less than a month after the overthrow of Ukranian President Viktor Yanukovych, the political part of the Association Agreement with the EU is signed by new Prime Minister Arseniy Yatsenyuk. Tensions rise as the new government forces move against the citizens of the country, not only freezing assets, but also accusing them of being pro-russian agents, and the shelling of Eastern Ukraine begins.