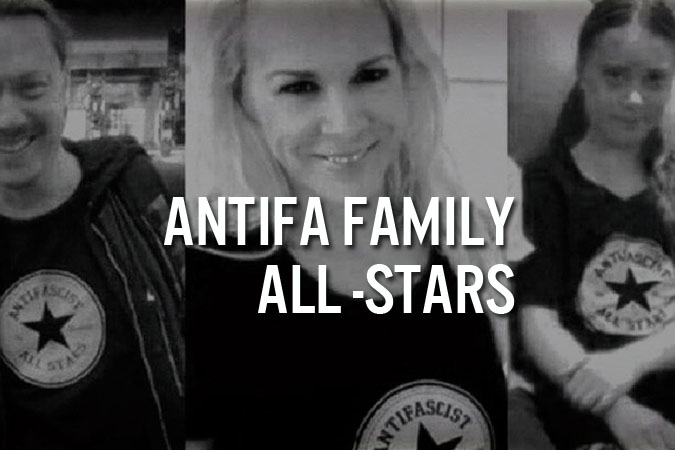 As you may know, teenage Swedish climate activist Greta Thunberg has traveled to the UN to tearfully declare that her childhood has been stolen, by what she believes to be the people who elected President Donald Trump. Based on her performance, it appears like her childhood may have been stolen, however the evidence points directly to her parents as the culprits of the alleged theft. It seems to the outside observer as though her parents may be using the young girl to push their own political agendas. While there is no clear evidence of this, we do know that someone has falsely made her believe that our planet is entering an Extinction Level Event, in which only ten years remain, which of course would make any child who understands math, believe that they will not have a future.

While many see prominent children, such as child stars as having great lives with so much money and so many fans, the exact opposite could be true. Many child stars when questioned as adults about their childhood, describe growing up in the spotlight as something that they did not enjoy, but were forced to do by their parents. Like most kids, they just want to play with other kids, and lament having missed out on such things. Many child actors eventually sue their own parents as soon as they are old enough to do so. In most cases, a child actor reaches adult age believing that they should have a lot of money from all the work they did as children, only to discover that their parents have spent it all.

The anger, and already apparent resentment portrayed in the facial expressions of this young girl may indicate that she has been made to believe that if she attempts to enjoy her childhood, she and millions more will die, which puts a huge weight on her shoulders. But who would put such thoughts in this child’s mind? How do her parents feel about the issue? Are her parents explaining to her that she can most certainly go to school if she chooses to do so? Do her parents have any agenda other than supporting their daughter’s interest in the climate?

After photos surfaced in July of the young girl wearing a shirt associated with Antifa, she denied any ties to the violent left-wing protest group.

“Yesterday I posted a photo wearing a borrowed T-shirt that says I’m against fascism,” she tweeted in July. “That T-shirt can apparently to some be linked to a violent movement. I don’t support any form of violence and to avoid misunderstandings I’ve deleted the post. And of course I am against fascism.”

Thunberg went on to criticize her detractors, claiming the shirt was innocuous, “can be bought anywhere” and is only linked to violence “according to some.” 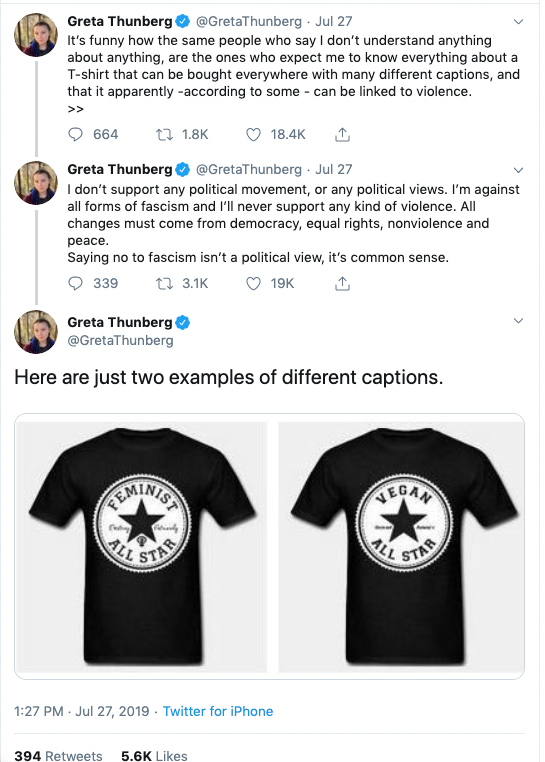 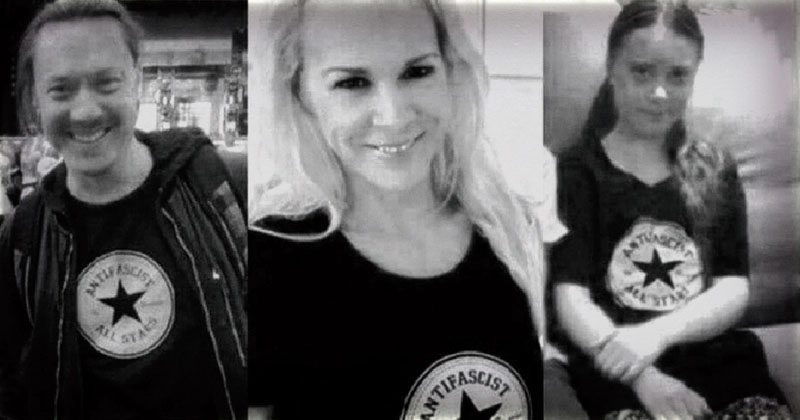 In recent days, however, photos have emerged showing her parents, Svante Thunberg and Malena Ernman, wearing the exact same t-shirt, throwing her whole explanation into question.

Antifa has faced calls by members of Congress to be labeled a domestic terror group. As previously noted, when originally asked about wearing the antifa shirt, the girl claimed the shirt was innocuous, and “can be bought anywhere” and is only linked to violence “according to some.” It makes me wonder if a conservative child or teenager was photographed wearing a MAGA hat, as well has both of his parents, and asked if they support President Trump, and responded the same way, would the left be open to a discussion or would they call for the entire family to be chased out of restaurants, schools or even jailed?