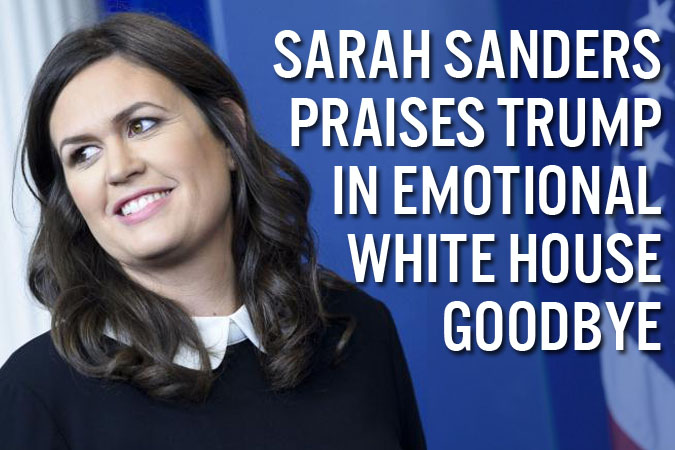 Sarah stood at her podium while a room full of mainstream propagandists shot lunacy bombs at her as if holding lunacy potato guns. Sarah had a way of eloquently responding to questions while remaining calm. This of course drove them insane, as they never wanted a response, what they wanted was for Sarah to lose her temper. This is why they would coordinate to ask the same questions over and over in hopes that she would, at some point give a different response.  The exact definition of insanity being applied in the form of lunacy bombs all coordinated at her podium. Sarah fought them off like Wonder Woman wielding lunacy bomb deflector cuffs.

Sarah Sanders stepped into the position when Sean Spicer couldn’t take the heat in July of 2017.  Sean Spicer did quite well as Press Secretary, considering the circumstances. The media was so ruthless that anyone in the position was up against that barrage of lunacy bombs. It would take a special kind of person to wrangle the children. That is where Sarah Sanders shined. As a mother of toddlers, she was very well experienced at maintaining patience while applying discipline even while being asked the same question over and over and over.

Sarah Sanders wasn’t just good at wrangling the kids. Her charismatic smile and generous but firm nature will be missed at the podium, and we at the Perilous Fight are sad to see her go. Who ever takes over the position has incredibly big shoes to fill. It would not be surprising if we have to go through several Secretaries before we find another who can handle the position for very long.

President Trump tweeted this afternoon that “After 3 1/2 years, our wonderful Sarah Huckabee Sanders will be leaving the White House at the end of the month and going home to the Great State of Arkansas.”

Adding that he “hopes she decides to run for Governor of Arkansas – she would be fantastic.”

After 3 1/2 years, our wonderful Sarah Huckabee Sanders will be leaving the White House at the end of the month and going home to the Great State of Arkansas….

….She is a very special person with extraordinary talents, who has done an incredible job! I hope she decides to run for Governor of Arkansas – she would be fantastic. Sarah, thank you for a job well done!

Sarah Sanders praised Trump in a sentimental moment where the president called Sanders up onto the stage to laud the work she had done for his administration.