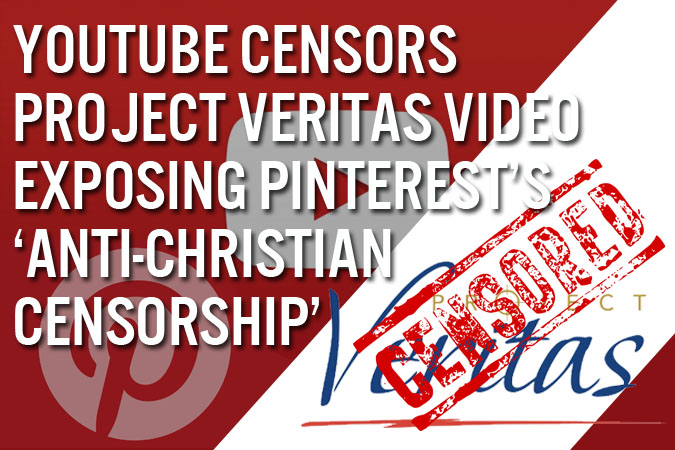 🚨🚨 YouTube has REMOVED our Pinterest Insider story 🚨🚨 The battle is on 🚨🚨 SUPPORT the insider who leaked the documents and got fired HERE: https://t.co/FLBzuLE65R pic.twitter.com/zWLfW2leRQ

Breaking News: Twitter has decided that investigative journalism is in violation of their terms of service – @Project_Veritas has been temporarily suspended from posting for tweeting internal communications from @Pinterest which show them calling @benshapiro a “white supremacist” pic.twitter.com/eJNDWEfanf

The privacy complaint was due to Project Veritas identifying two Pinterest employees allegedly involved in the censorship decisions at 3:40 to 4:07 in their video:

You can watch the video here:

Leftist outlets like The Daily Beast are allowed to dox private citizens for sharing memes with total impunity, but investigative journalism exposing Big Tech is not allowed.

On his show Wednesday night, Tucker Carlson interviewed Pinterest whistleblower, software engineer Eric Cochran, who was swiftly fired after their exposé came out:

You can donate to Cochran’s GoFundMe to help him out. He’s likely going to be blacklisted from all the Big Tech companies as happened with James Damore because these companies are effectively a cartel which collude with one another.

“This is the biggest mistake of their lives,” O’Keefe said.

This is the biggest mistake of their lives. pic.twitter.com/GoOwOn1RvV

Note, YouTube made this decision as congress is currently holding antitrust hearings to investigate Big Tech.

Big Tech’s incredible arrogance may be their undoing.