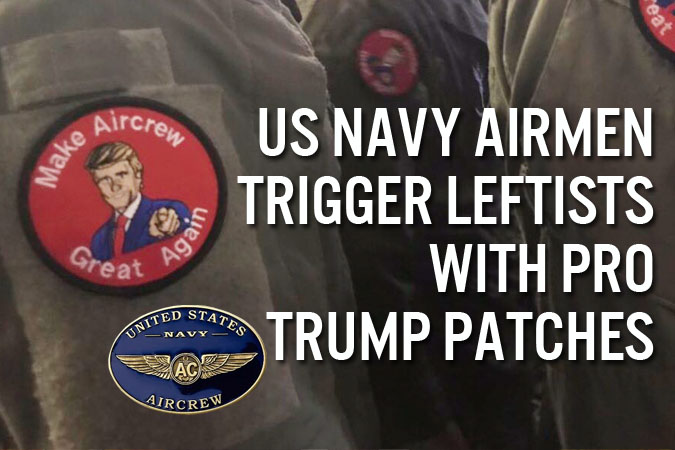 Photos of US Sailors wearing patches on their uniform in support of President Trump have triggered outrage among keyboard warrior leftists.

The images of Navy personnel aboard the USS Wasp wearing uniforms adorned with a likeness of Trump were shared on Twitter along with derisive comments from haters.

The wording on the patches, ‘Make Aircrew Great Again’ is a clear reference to Trump’s Presidential campaign slogan.

The images originated in reports on Trump’s recent trip to Japan, where he made a stop at a US base in Yokosuka.

Airmen onboard the USS WASP wearing patches on their jumpsuits that read “Make Aircrew Great Again.” The patches include an image in the center in the likeness of President Trump. pic.twitter.com/rQKAyrcDte

Some of the sailors aboard the WASP where Trump is now speaking are wearing this patch pic.twitter.com/07LZojqnYH

Leftists quickly started to share the images and express outrage, comparing them to fascist/Nazi symbolism.

This is Fascism and a clear violation of the UCMJ. Do they have armbands, too? Who ordered this? https://t.co/OFRJoEeBjH

This same leftist called for the Sailors to be reprimanded, attempting to alert their superiors, and falsely charging that they are in violation of the Uniform Code of Military Justice (UCMJ).

Dear Sirs. @USSWaspLHD1 your sailors/airmen are in clear violation of UCMJ bringing disgrace to the Wasp and the US Navy. Who ordered this? Who paid for it? What say you? pic.twitter.com/xFA8gIecBn

Other frothing leftists were shocked to discover that the patches have been worn for at least two years.

I had to check to make sure this was real. Verdict: Yes, these airmen really are wearing patches that say “Make Aircrew Great Again” with an image depicting Trump in the center.

Another leftist professor mused that the military has been brainwashed into supporting Trump’s ‘personality cult’, and may no longer be loyal to the constitution.

I defer to my colleagues who study civilian/military relations, but I find this worrisome – the military must be loyal to civilian control and the Constitution, not part of a presidential personality cult https://t.co/AgDwtKXT3x

According to the Associated Press, the Navy is looking into whether the airmen may have breached dress code protocol.

“In a brief statement Tuesday, the Navy said only that the matter was under review by Navy leadership to ensure that the wearing of the patches did not violate policy or regulations,” reported the AP Tuesday.

Previous charges of violating the Uniform Code were quashed by the Air Force last year when troops in Iraq wore MAGA hats for Trump’s Christmas visit.

“There is no rule against Airmen bringing personal items to be signed by the president,” U.S. Air Forces Europe said in a statement at the time.

Trump flag (she dropped it after she saw me taking a photo) pic.twitter.com/LhPwUNdEK3

To these Trump-haters it is horrifying that US troops would express support for their country, and their president and commander in chief. Of course, when Obama was president, and engaging in more destructive military action, the troops expressing support for him was entirely acceptable.