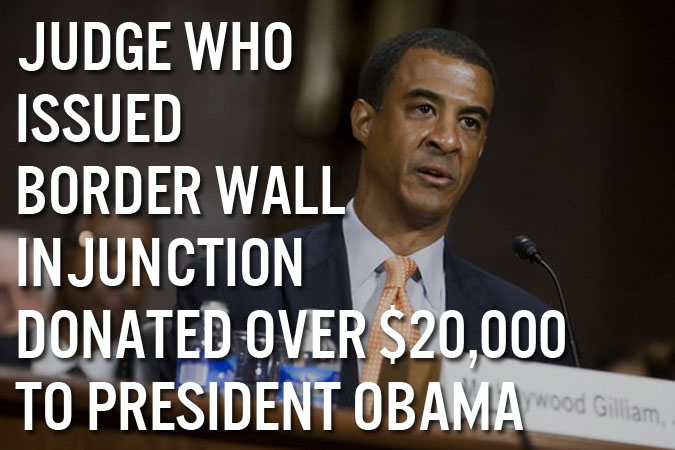 The Epoch Times, which first reported Gilliam’s political contribution history, noted the donations began in 2007, a year after Gilliam’s stint as assistant U.S. attorney in the Northern District of California, and ended after he began his U.S. district judgeship.

During his confirmation, Gilliam said he “would base my decisions solely on the facts of each case and the applicable precedent, without regard to any political ideology or motivation,” and that his personal views “would not interfere in any way with my ability to neutrally apply the law,” The Washington Examiner reported.

Judge Gilliam’s Friday preliminary injunction reportedly bars the Pentagon from transferring $1 billion from counter-drug funding to expand or enhance border barriers. It also “appears to jeopardize another $1.5 billion of the $8.1 billion the administration planned to use for border construction,” according to Politico.

The order involves money “not contingent on [Trump’s] emergency declaration,” Politico reported, and only applies to the El Paso, Texas and Yuma, Arizona sectors.

President Trump responded to Gilliam’s ruling on Saturday, calling it a “ruling against Border Security and in favor of crime, drugs and human trafficking” by “another activist Obama appointed judge.”

Another activist Obama appointed judge has just ruled against us on a section of the Southern Wall that is already under construction. This is a ruling against Border Security and in favor of crime, drugs and human trafficking. We are asking for an expedited appeal!