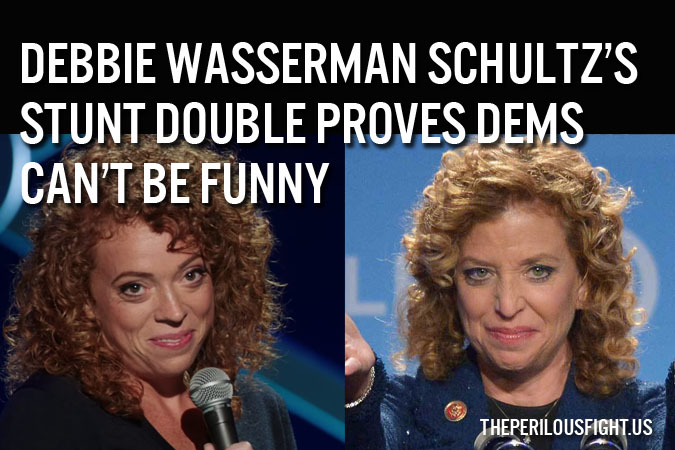 So called “comedian” and Debbie Wasserman Schultz’s stunt double, Michelle Wolf’s Presentation at this year’s White House Correspondent’s Dinner simply wasn’t funny. Like Cinderella, the left has proved again that the recent election was their MIDNIGHT. After their election loss, they all turned back into pumpkins and lost their talent. Actors can no longer act, News anchors can no longer spin, Rappers can no longer rap (example; Eminem), and of course, comedians can no longer be funny. We have seen this time and time again with shows like SNL. The funny thing is that they themselves don’t realize it, so when the finish their performances they go backstage and think to themselves “nailed it!”. Later when everyone lets them know how bad they were, they are confused.

It’s strange to me that this woman would get up & make fun of Sarah Sanders looks, when her own face would make a freight train take a dirt road.

PATRIOTS UNBELIEVABLE HOW NASTY THE MEDIA
HAS BEEN TO OUR PRESS SECRETARY WHO RADIATES
MEANING OF CLASS & GRACE 🙏 DAILY SHE FIGHTS OFF ATTACKS AGAINST PRESIDENT TRUMP WITH THE CALM OF A LAMB/ PASSION OF A PATRIOT LADY / FIERCE
LIKE A LION 🇺🇸
ALWAYS & FOREVER A
PATRIOT💯 pic.twitter.com/eV8dCrH6jz

Thank you, @therealroseanne for speaking up on this!

From the swamp to the gutter… https://t.co/3SeDLK7wJx

I wouldn’t have thought any less if they would have walked out — it was insulting and shameful. #WHCD is not about journalism this year but about elite snobbery and bullying. I’m thankful I wasn’t there. @realDonaldTrump was smart not to go and hang w great people in #Michigan https://t.co/vtrOxzOOGl

Just utterly disrespectful, and simply not funny. Even CNN bashed her on her "performance" #WHCD pic.twitter.com/FUt2NX9rMG

The White House Correspondents’ Dinner was a failure last year, but this year was an embarrassment to everyone associated with it. The filthy “comedian” totally bombed (couldn’t even deliver her lines-much like the Seth Meyers weak performance). Put Dinner to rest, or start over!

After the backlash, the White House Correspondent’s Association released the following statement.

President did not attend the WHCD, but instead preferred to hang out with the good people of Michigan

.@POTUS: "You may have heard I was invited to another event tonight, the #WHCD, but I'd much rather be in Washington, Michigan, than in Washington, D.C." #TrumpRally#MAGA pic.twitter.com/1UArzyFZwF