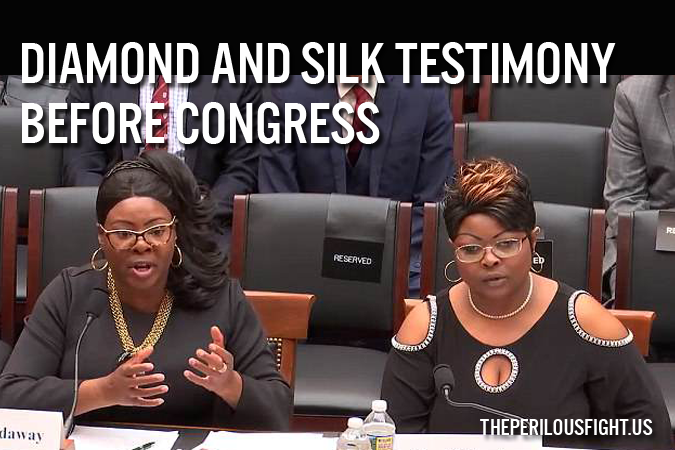 Diamond and Silk testified before Congress regarding the censorship of themselves and conservative voices on Facebook. Ironically, they were treated very well by white Congressmen, but were treated very badly by black members of Congress. Representatives Hakeem Jeffries, Hank Johnson and Sheila Jackson tried extensively to portray Diamond and Silk as liars, and their failed attempts only made them look like extreme racists. They started off by stating that they did not believe Diamond and Silk deserved to be heard by Congress, and that they would much rather be discussing fake Russian collusion and finished it off by flat out calling them liars. Sheila Jackson attempted to openly confirm in Congress that they were lying because she does not understand how calendars work. She tried every which way to get them to admit that the 12th of the month comes before the 11th of the month.

Diamond and Silk did not allow themselves to be backed into a corner. They answered the questions truthfully and honestly and the world watched them be discriminated openly by the virtue signalers of discrimination.

Watch Diamond and Silk OBLITERATE Black Congressman Hakeem Jeffries: ‘I can see you do look at fake news!’

Diamond and Silk Go Off On Rep Sheila Jackson Lee: ‘Don’t Try To Mince My Words’

Diamond and Silk Speak with Fox News after the Congressional hearing