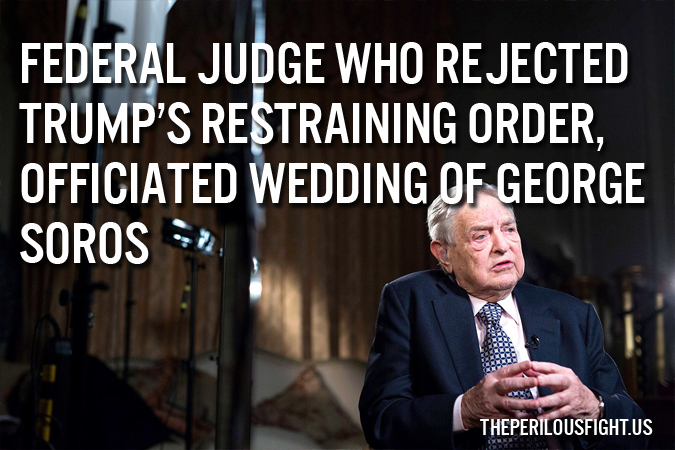 “Federal judge Kimba Wood officiated at the non-denominational wedding, which was attended only by family members, including Soros’ five children from his two previous marriages.”

On Friday, President Trump was officially granted intervention in the Cohen case.

Federal Judge Kimba Wood made her decision on Monday.

She rejected Trump’s request for a temporary restraining order.

A federal judge rejected a request from President Donald Trump and his personal lawyer Michael Cohen for a temporary restraining order that would have kept federal prosecutors from reading files seized in raids last week.

Judge Kimba Wood said a government taint team can weed out privileged documents, but she left open the possibility an independent third party could play a role at a later time, in the interest of “the perception of fairness.”

“I have faith in the Southern District prosecutors, that their integrity is unimpeachable,” Wood said.

Her ruling came at the end of a hearing attended by Cohen and Stormy Daniels, who sat feet apart but did not appear to interact.

How’s this for a fun fact? The same federal judge who just rejected Trump’s request for a temporary restraining order, officiated George Soros’ wedding in 2013.

It was a very intimate ceremony with only close family members in attendance.

Hillary Clinton hand-picked Kimba Wood to be on her list of nominees for Bill Clinton’s consideration.

After it was revealed Kimba Wood employed an illegal immigrant as a nanny, she was dropped from consideration to become Bill Clinton’s Attorney General.

This is totally normal, right?

Soros and Bolton, a health care consultant, will exchange vows in a small ceremony on Saturday morning at the Bedford, New York estate, which Soros bought in 2003 from “Jurassic Park” author Michael Crichton.

Kimba Wood, a federal judge, will perform the non-denominational ceremony, which will be attended by members of the couple’s families, including his five children, a source familiar with the arrangements told Reuters.

The wedding ceremony will be followed by a reception on Saturday evening with more than 500 guests at the Caramoor arts center in nearby Katonah. On Sunday, the couple will preside over a brunch, also at Caramoor

JUDGE “KIMBA WOOD” WHO RULED AGAINST PRESIDENT TRUMP & MICHAEL COHEN Was Hillary’s Choice For AG And A Soros Crony Who Oversaw His Wedding Is A Democrat Activist Judge Which Is The 4th Criminal Branch Of Government…#DeepStateCorruption #TheBrooksBrown pic.twitter.com/7kNRgGcmL2