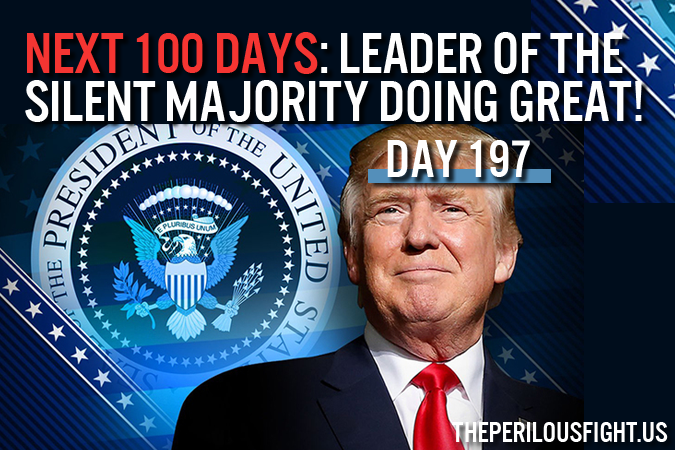 My Fellow Americans, As we celebrate “American Dream Week” at the White House, we continue to see incredible results. This week, the Dow jones industrial average reached an ALL-TIME high. Never ever has it been so high. It made the unemployment rate hit a 16-year low and last quarter real GDP growth increased to 2.6%.

Okay, thank you very much. I just want to congratulate Acting Secretary — this is really a big — this is a big position — Elaine Duke. A terrific person. She has done an amazing job for the Trump administration and everywhere she preceded. So congratulations. This is a very important thing you’re doing.

We are very strong on homeland security and we are very strong with respect to FEMA. FEMA is something that I’ve been very much involved in already. We’ve had some things during the last six months, including the highway in Atlanta…

Today, President Donald J. Trump signed into law H.R. 3298, the Wounded Officers Recovery Act of 2017. The President is proud to sign this bill to allow the U.S. Capitol Police Memorial Fund to provide financial assistance to Capitol Police officers injured in the line of duty, including Special Agents David Bailey and Crystal Griner, who were injured defending Members of Congress and others during the shooting at the June 14, 2017 practice for the annual Congressional Baseball Game for Charity. Special Agents Bailey and Griner, and all of our law enforcement officers injured in the course of protecting our safety, deserve our steadfast support.

President Donald J. Trump spoke today with President Emmanuel Macron of France to explore how to increase cooperation in addressing the ongoing crises in Syria and Iraq and countering Iranian malign influence. They also talked about forging a political resolution in Libya and countering terrorist activity in the Sahel region of Africa. They agreed that the Maduro regime in Venezuela must restore the rights of the Venezuelan people and reaffirmed the importance of all sides implementing the Minsk agreements to reach a peaceful settlement in Ukraine. Finally, they discussed mutual interests regarding North Korea.