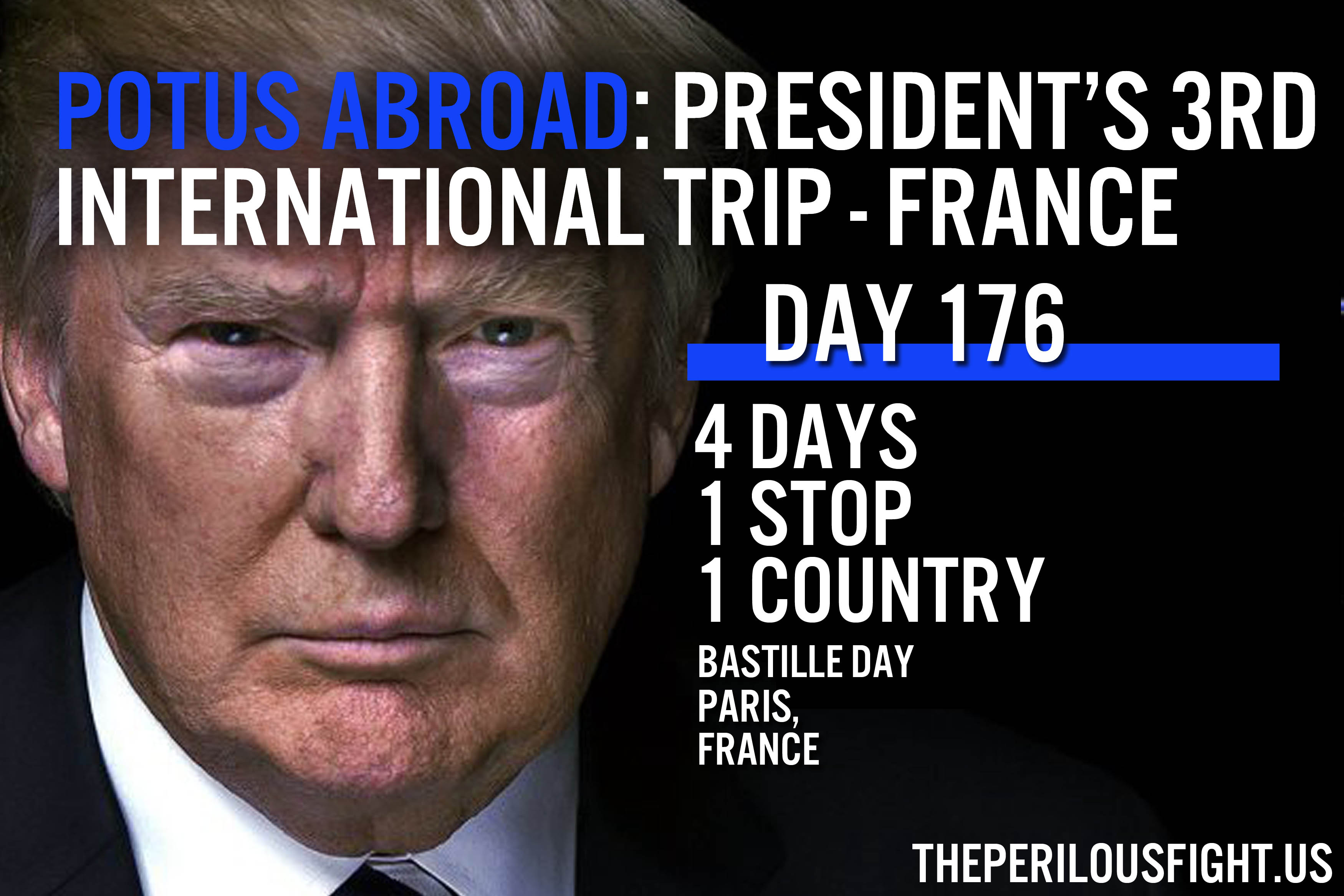 Today, President Donald J. Trump is in Paris, France for meetings and celebrations with America’s oldest ally. The President will attend France’s annual Bastille Day celebration–the first President to do so since 1989. To commemorate the 100th anniversary of the United States’ entry into World War One, the people of France have designated America this year’s national guest of honor. Troops from the US Army’s First Infantry Division–the first unit to arrive on French soil in 1917–will march in the parade, and US Air Force Thunderbirds will conduct a flyover with planes from the French air force.

4:10 AM President Trump and First Lady Melania Trump participate in the French National Day Parade with President and Mrs. Macron

Photo of the Day

From The White House

Statement from President Donald J. Trump on Bastille Day 2017: Jul 14, 2017-
On this great day—France’s national day and the 228th anniversary of the French Revolution—Melania and I were proud to stand with the President of France and Madame Macron and to celebrate with the French people…
View Full Press Release

Press Gaggle by Homeland Security Advisor Tom Bossert en route Newark, NJ | July 14, 2017: Jul 14, 2017-
So let me just start the conversation by saying that President Trump and President Macron had private conversations yesterday, but also an extended bilateral conversation. And I wanted to talk you about that and give you a readout, and answer your questions if I might…
View Full Transcript

Readout of President Donald J. Trump’s Call with King Salman of Saudi Arabia: Jul 14, 2017-
President Donald J. Trump spoke today from Air Force One with King Salman bin Abdulaziz Al Saud of Saudi Arabia. King Salman congratulated President Trump on the victory over ISIS in Mosul. The two leaders discussed recent diplomatic efforts to resolve the dispute with Qatar and underscored the importance of following through on commitments from the Riyadh Summit. In particular, the President emphasized the need to cut all funding for terrorism and discredit extremist ideology.
View Press Release

President Donald J. Trump Proclaims July 16 through July 22, 2017, as Captive Nations Week: Jul 14, 2017-
During Captive Nations Week, we stand in solidarity with those living under repressive regimes, and we commit to promoting our American ideals, grounded in respect for natural rights and protected by the rule of law, throughout the world. As President Reagan often reminded us, as a shining city upon a hill, America has a duty to shine its beacon light on freedom loving people around the world…
View Full Press Release

I will be at the @USGA #USWomensOpen in Bedminster, NJ tomorrow. Big crowds expected & the women are playing great-should be very exciting!

President @EmmanuelMacron,
Thank you for inviting Melania and myself to such a historic celebration in France. #BastilleDay #14juillet pic.twitter.com/KZjJQOo0H1

Just landed from Paris, France. It was an incredible visit with President @EmmanuelMacron. A lot discussed and accomplished in two days!

Left Paris for U.S.A. Will be heading to New Jersey and attending the#USWomensOpen, their most important tournament, this afternoon.

Great conversations with President @EmmanuelMacron and his representatives on trade, military and security.

The United States mourns for the victims of Nice, France. We pledge our solidarity with France against terror. 🇺🇸🇫🇷 pic.twitter.com/7irbz08oT3

It was a great honor to represent the United States at the magnificent #BastilleDay parade. Congratulations President @EmmanuelMacron! pic.twitter.com/1J4vZiy98y

.@VP Mike Pence is working hard on HealthCare and getting our wonderful Republican Senators to do what is right for the people.

After all of these years of suffering thru ObamaCare, Republican Senators must come through as they have promised!

So impt Rep Senators, under leadership of @SenateMajLdr McConnell get healthcare plan approved. After 7yrs of O'Care disaster, must happen!

Republicans Senators are working hard to get their failed ObamaCare replacement approved. I will be at my desk, pen in hand!

Great evening with President @EmmanuelMacron & Mrs. Macron. Went to Eiffel Tower for dinner. Relationship with France stronger than ever. pic.twitter.com/ib1pdUYoEU