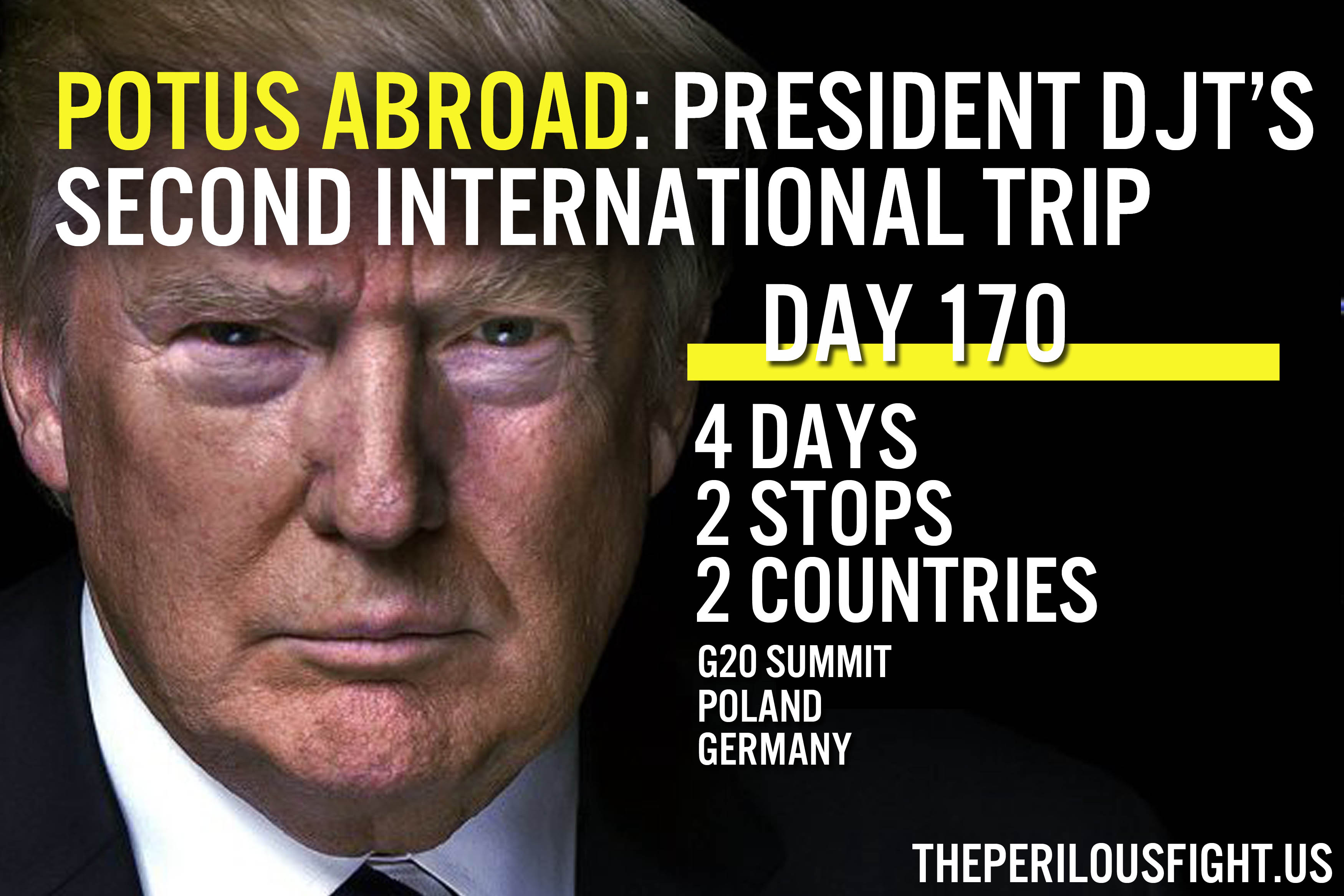 This morning, President Donald J. Trump participated in a series of meetings with Foreign Leaders at the G20 Summit. President Trump hopes to communicate to American allies in Europe and major leaders across the world that though he is committed to advancing America’s interests, his America First agenda encompasses the needs of the United States’ partners abroad. Long-term peace and international prosperity come when the United States displays leadership and is actively engaged with the rest of the world.

9:00 AM: Remarks by President Trump Before Bilateral Meeting with Prime Minister May of the United Kingdom

President Donald J. Trump met with Prime Minister Theresa May of the United Kingdom during the G20 Summit in Hamburg, Germany. The two leaders affirmed the special relationship and discussed counterterrorism initiatives and trade. They also conferred on a range of joint foreign and security policy interests.
View Full Transcript

President @realDonaldTrump and U.K. Prime Minister Theresa May having a bilateral meeting here at the #G20Summit in Hamburg, Germany. #USA pic.twitter.com/fRRka1B02T

10:00 AM: Remarks by President Trump at Women’s Entrepreneurship Finance Event

11:00 AM: Remarks by President Trump and President Widodo of Indonesia Before Bilateral Meeting-

President Donald J. Trump met with President Joko Widodo today at the G20 Summit in Hamburg, Germany. The two leaders emphasized their commitment to strengthening the United States-Indonesia strategic partnership, which is grounded in the interests and values shared by two of the world’s largest democracies. They discussed ways to expand fair and reciprocal trade between their countries, as well as ways to strengthen defense cooperation. The two Presidents underscored their resolve to defeat terrorist networks in Southeast Asia and around the world, and emphasized the importance of isolating terrorists from financial and ideological support. The two leaders pledged to continue to coordinate closely on other threats to international security, including North Korea’s nuclear and missile programs.

President Donald J. Trump met with Prime Minister Lee Hsien Loong of Singapore today at the G20 Summit in Hamburg, Germany. The two leaders praised the United States-Singapore economic relationship, which serves as an important hub for United States exports to the fast-growing Southeast Asia region. The President and Prime Minister Lee discussed regional security issues and their shared resolve to press North Korea to abandon its nuclear program and cease its provocations. They also affirmed close cooperation in preventing the rise of terrorism and Islamist extremism in Southeast Asia.

President Donald J. Trump met today with Prime Minister Shinzo Abe of Japan at the G20 Summit in Hamburg, Germany. The two leaders condemned North Korea’s July 4 launch of an intercontinental ballistic missile, which showed that North Korea is a threat to the United States and its allies, and countries around the world. President Trump and Prime Minister Abe affirmed that the international community must address North Korea’s ballistic missile and nuclear weapons programs quickly and decisively. President Trump reaffirmed the ironclad commitment of the United States to the defense of Japan, as well as to the Republic of Korea, from any attack, and reiterated that the United States is prepared to use the full range of capabilities in such defense. President Trump and Prime Minister Abe committed to redoubling their efforts to bring all nations together to show North Korea that there are consequences for its threatening and unlawful actions. The two leaders also discussed a range of other regional issues of mutual interest. They reaffirmed that the strong United States-Japan Alliance is the cornerstone of peace and prosperity.

3:51 PM: Remarks by President Trump Before Bilateral Meeting with President Xi of China-

President Donald J. Trump met today with President Xi Jinping of China at the G20 Summit in Hamburg, Germany. President Trump discussed the destabilizing threat posed by North Korea’s nuclear and ballistic missile programs and the need to respond to North Korea’s major escalation involving the test of an ICBM. Both sides reaffirmed their commitment to a denuclearized Korean Peninsula. The two leaders also reviewed work in other areas in the bilateral relationship, including economic issues such as reciprocal trade and market access. President Trump and President Xi directed their security and economic teams to make progress in upcoming dialogues.

.@potus & I enjoyed our visits to #Warsaw & #Hamburg. A lot of work was accomplished, friendships made. Headed home! 🇺🇸 pic.twitter.com/wJOCMMPdD0

Leaving Hamburg for Washington, D.C. and the WH. Just left China’s President Xi where we had an excellent meeting on trade & North Korea.

Law enforcement & military did a spectacular job in Hamburg. Everybody felt totally safe despite the anarchists. @PolizeiHamburg #G20Summit

The #G20Summit was a wonderful success and carried out beautifully by Chancellor Angela Merkel. Thank you!

We will fight the #FakeNews with you! https://t.co/zOMiXTeLJq